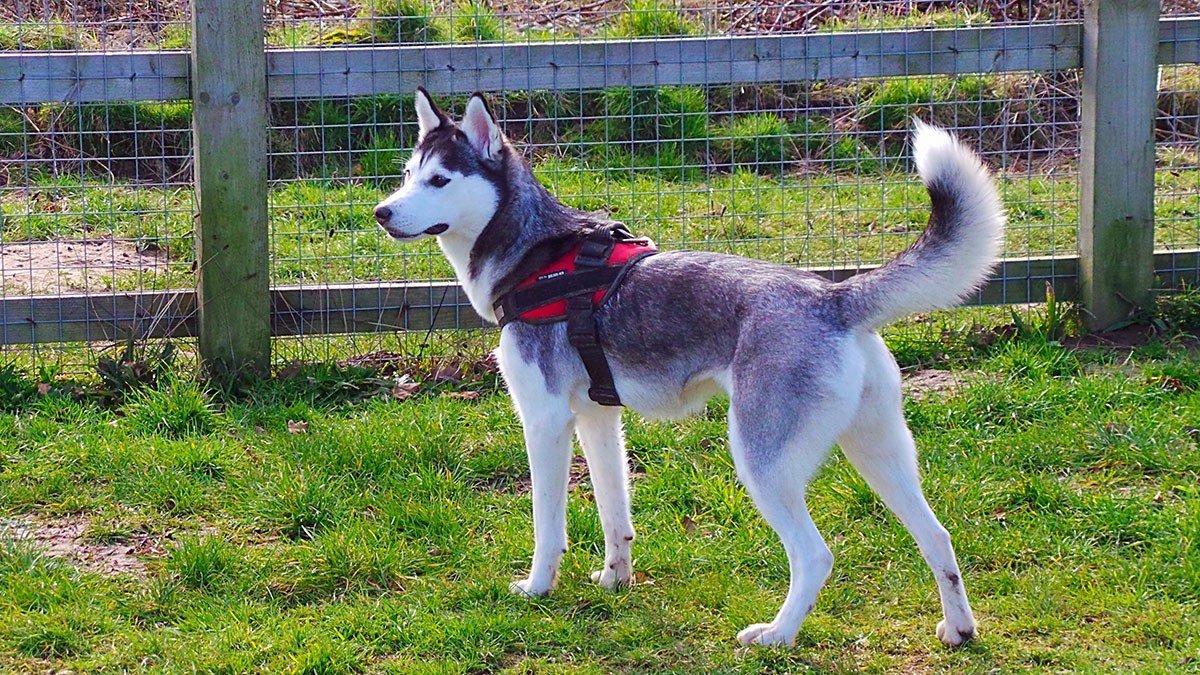 Our inbox is never short of husky owners asking the question “is my husky too skinny?” or “how can I get my husky to gain weight”.

Although the question is common, the answer is almost always, no. The majority of husky owners ask themselves this question at some point.

As often is the case, the owners who are concerned have young huskies or dogs who have relatively sleek coats. Young huskies often look a little slim; they’re still growing into their bodies.

It’s worth remembering that Siberian huskies are a naturally lean breed. The chunky looking huskies you see likely have a woolly coat which makes them appear much bigger than they actually are. There is also a good chance other huskies you’ve seen are actually overweight.

It’s healthier for a dog to be a little underweight than it is overweight.

People Are The Problem

As if it’s not enough that you’ve been worrying is my husky too skinny. To then have a series of other dog owners make comments about your dogs’ weight, such as “why is your husky so skinny?” Or “are huskies always this slim?”, which will naturally make you feel like a terrible owner. All the while they’re stood there grinning next to their 15 stone, morbidly obese Labrador.

It doesn’t help that huskies are notoriously fussy eaters. They can often go for a couple of days barely touching their food. It is often the fact the husky looks slim, coupled with the fussy eating that begins to raise alarms for owners.

The temptation is to rush out and buy different foods, kibble made specifically for fussy eaters and even resort to cooking their huskies delicious, home-cooked meals. Whatever it takes to get them to eat. It’s a mistake to think regularly switching your dogs’ food is the answer. You’re teaching your already fussy husky to become even pickier; I might suggest they’re training you.

Some dogs, like people, are very particular about things like the texture or size of their food. Some dogs like their food dry and crunchy while some others may prefer their food dampened with liquid. Experiment and see what your dog prefers.

You can also try adding a natural, unsalted chicken-bone broth. The addition of broth not only adds flavour to entice the fussy eater, but it will also add additional nutrition to the food. Alternatively, you can achieve a similar result by adding a small amount of quality, grain-free wet food.

Although it’s not a good idea to regularly switch brands or to move from kibble to tinned, or raw to cooked, it is a good idea to switch up flavours and proteins every couple of weeks. The variety will not only keep your husky interested in their foods; it will also provide a more balanced, nutritionally complete diet.

Whether your Siberian husky is underweight or not, it’s essential to feed your dog a healthy, appropriate diet. If you’re feeding kibble, it should contain high-protein and be completely grain-free. Alternatively, if you’re providing a raw diet to your dog, ensure it’s varied and includes the correct ratios of protein, bone and offal.

Confused what you should be feeding your husky? please do check the following article: Husky Diet.

Maybe Your Husky is Underweight – When To Be Concerned?

Ideally, you will be able to see your huskies waist tucked behind their ribs. You should be able to feel your dogs ribs, but if you can see the outline of your dog’s ribs and its waist is noticeably more narrow than its ribcage, then your husky may be underweight.

Even if your husky matches the above description, don’t panic. At this point, I suggest making an appointment with your vet, ideally one who has experience with the breed. The vet will likely put your mind at rest and confirm you’re crazy for worrying, or perform a series of tests.

How Much Should My Husky Weigh?

The concerns, though typically arise during a huskies puppy years, before the husky is fully developed.

Weight of a Growing Female Husky

Weight of a Growing Male Husky

It’s normal to have concerns over your huskies weight, not a week goes by when an owner doesn’t ask; is my husky too skinny. Don’t beat yourself up over it and more importantly, don’t obsess over their appearance. Certainly don’t make any changes based on the comments of other dog owners, no matter how paranoid they might make you.

If you’re still concerned after reading the article, make an appointment with your local vet who will either put your mind at ease or help you get to the bottom of the problem should one exist.

There is likely going to be a time in your huskies life when you’re trying to figure out how to help them lose weight. Enjoy the lean and healthy years whilst they last.